Robson’s morals are not a good example 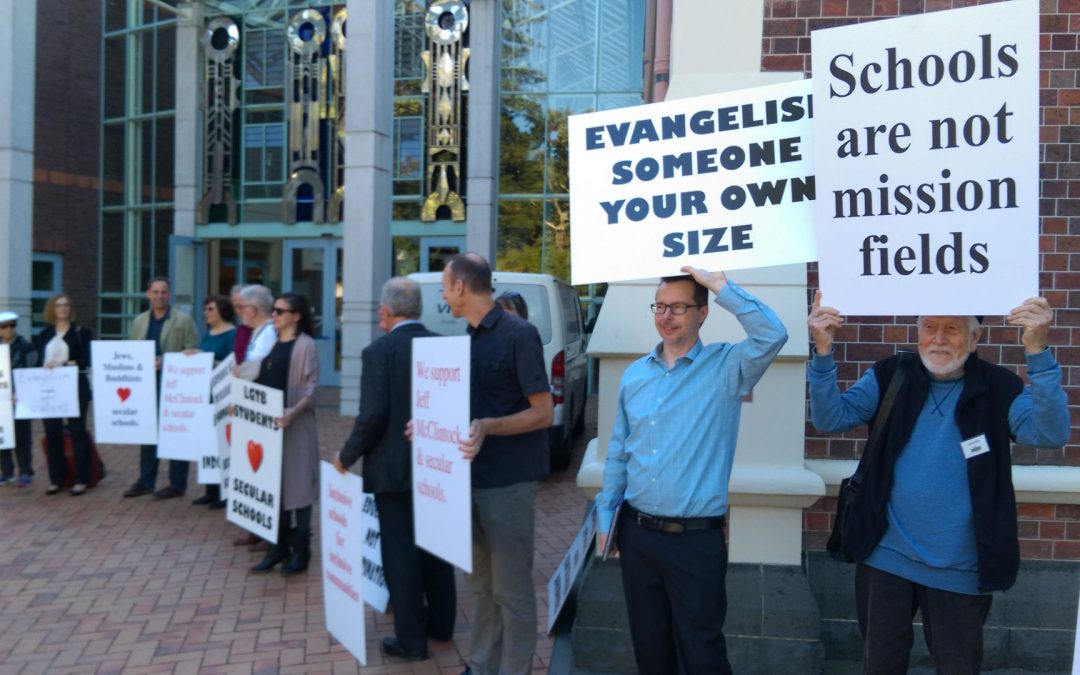 If there was ever a good example of why religious instruction in New Zealand primary schools is a bad idea Geoff Robson’s opinion piece would be it. If we want our schools to be a tolerant environment where children from any background or belief system can attend without being excluded, ostracised or bullied, giving religious fundamentalists like Robson open access to our children is perhaps ill advised.

The Churches Education Commission go to great lengths to suppress any suggestion that children are taught about hell, an eternal torment that ‘unbelievers’ will suffer. We are expected to believe that religious fundamentalists like Robson, who openly proclaimed his belief in the torments of hell, would fail to communicate their core beliefs to the children they instruct.

The reality is that children have been seriously affected in the past by religious instructors. In one case a young girl was told by her religious instructor that she had to pray hard for her father, who had cancer at the time, or he would die. Her father passed away. For years she blamed herself for not praying hard enough. Now grown the scars have stayed with her. Other families have been ostracised from their communities for opting their children out of religious instruction.

Unfortunately there is no requirement in law for schools to either inform parents about these classes or to seek their permission. Often the first thing parents know is their kids coming home with religious material and talking about God.

The morals and beliefs of Robson and Israel Folau are all too typical of the kind of messages evangelical Christians teach our kids. In a way it is hard to blame people for having views that have been pervasive in the communities and schools the grew up in. Robson even described “growing up in a churchgoing family, where I learned about God’s grace from a young age.” But these beliefs have consequences.

In 2013 forty percent of New Zealand state primary schools ran some form of religious instruction. Today the number has dropped by several percentage points, but religious instruction remains at many schools despite clear evidence of the harms to children as evidenced from an avalanche of complaints to the Human Rights Commission.

While religion outside Christianity make up about ten percent of the population there are virtually no religious instruction classes held other than Christianity. In the 2013 census about forty percent of the New Zealand population were non religious. Numbers are not yet out from this years census, but if the decline of Christianity follows the straight line trend we will be close to seeing Christians in the minority.

Yet Christianity has almost exclusive access to New Zealand children in state primary schools. We are allowing them to utilise valuable learning time for our children to teach them about Christian doctrine.

Minister of Education Chris Hipkins recently committed to publishing guidelines for schools running religious instruction, which is certainly well overdue. However, the question remains why such religious privilege continues to exist in a secular state. We would not tolerate schools giving special preference to political parties to indoctrinate our kids, so why do we tolerate special rights for Christianity?

The countryside is dotted with Churches, so there is no lack of options for the religious to take their children to Sunday School. In fact with declining church attendance closing down religious instruction in schools might actually boost church attendance on Sundays. The reason they are in schools is that they make excellent mission fields. So many young minds to bring into the fold.

The Secular Education Network has been fighting for meaningful reform for six years. Similar efforts have been made for almost one hundred years. David Hines and Tanya Jacob have brought legal proceedings against the Government in an attempt to force it to review these practices, which they hold to be a violation the Human Rights Act and Bill of Rights. To me it is self evident; it is time we have schools that are welcoming of all children.