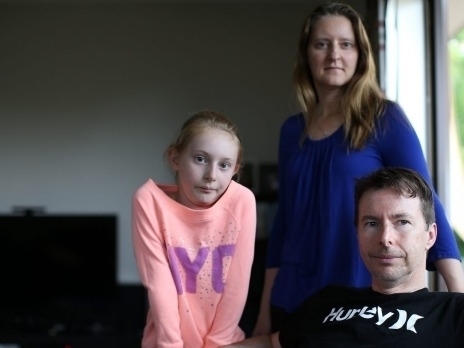 Red beach runs a religious instruction program named ‘Values in Action’ (VIA). In previous years the permission slip for parents to sign did not refer to religious content, portraying the class as simply a values education program. Suspecting that the class was not simply values education McClintock’s partner Lisa went along to observe one of the classes to determine the actual nature of the class. It was at this point that she discovered the true evangelical nature of the program.

At this point they declined to sign the permission form for the VIA program for Daughter Violet. Each week the religious instructor gave a different child in the VIA class a turn holding a special soft toy. Children were promised their turn on condition they continued to attend religious instruction. When Violet was opted out she became upset and cried when she was told she would not be able to hold the special soft toy, saying “I haven’t had my turn to hold the teddy bear”.

The VIA programme had the effect of playing children and parents against each other to coerce consensual attendance in the classes.

Children opting out sat on the floor where there were books available to read. They were told not to talk in order to avoid interrupting the class in progress. Since Violet had not learnt to read to herself at this stage, she was left with nothing to do.

For the rest of the year Violet was segregated from the rest of the class and placed alone at the back of a room nearby, treatment known by both teachers and students as normally reserved for putting naughty children in ‘timeout’.

In mid 2014 McClintock filed a complaint with the New Zealand Human Rights Commission. He raised the idea of running the religious instruction programme after school, or before school, or at lunchtime, or using unbiased state teachers. Antony Wentworth, Chairperson of the Board of Trustees, attempted to frame this as an attempt to frame McClintock’s recommendations as being unreasonable, and rejected any attempt at mediation.

At this point the family had little option but to consider other legal options. Thanks to the offer of pro bono support from Human Rights Lawyer Richard Francois, who became interested in the area of religious instruction after the events at St Heliers School in early 2014, McClintock has been able to file for a Judicial Review of the decision of the School Board at Red Beach to conduct religious instruction in a way that is discriminatory.

Francois has identified several causes of action related to violations of New Zealand law by Red Beach Board of Trustees that he will argue in the review. He has identified that the role of the Board of Trustees is to promote student achievement, and that Red Beach School, in allowing religious instruction and closing the school when it could be offering educational instruction, has harmed the educational opportunities of students.

He contends that the school violated the law when it failed to properly manage children who opt out, and repeatedly included children in religious instruction in direct conflict with the written instruction of parents presents.

He points out that Non-Christian children are treated differently from their Christian counterparts and as a result suffer the detrimental effect of stigma associated with segregation from their classmates. He further points to the larger social impact, that Non-Christian parents who are concerned about their children participating in religious instruction programmes might refrain from opting their children out for fear of reprisals.

The Christian Education Commission has filed to join the case, even though they are not the organisation running the VIA program. They are claiming that they have an interest in the outcome of the review, and that if it results in a declaration of inconsistency between the Education Act and Bill of Rights Act that the law may change. Dominic Hoeft, General Manager of the CEC said in an email to churches that “The High Court does not have power to change the law, but if the High Court rules that Section 78 is inconsistent with the Bill of Rights, it will then go through the parliamentary process and there is a chance that the law may be changed.”