Atheists need to be more Skeptical 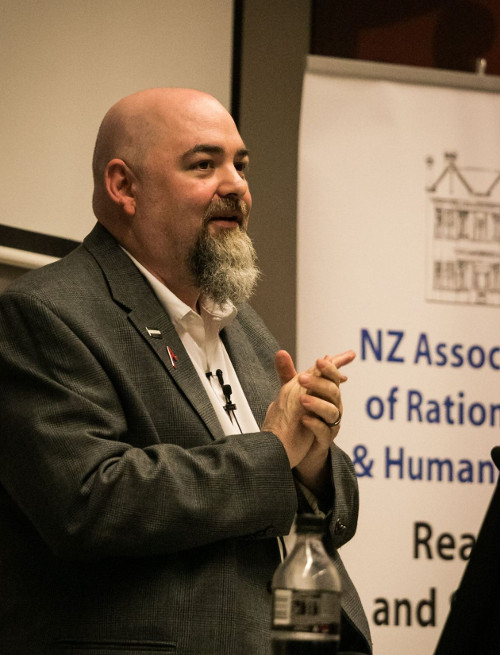 Matt Dillahunty, host of The Atheist Experience made popular on YouTube, has challenged an Auckland audience of primarily atheists to be more sceptical. He gave a talk recently to a group from the Reason and Science Society at Auckland University, the New Zealand Association of Rationalists and Humanists, and Auckland Skeptics. The theme of his talk was how sceptical thinking related to magic and gave the audience an example of his own magical skills.

Breaking from his light hearted magical delivery he touched on a more serious topic of scepticism in the atheist community, saying “I want to talk about something that many sceptics disagree with me about. And I’ve had this conversation over and over again. Some of you this will be ground you’ve seen me talk about more than once because I gave a talk at the American Atheist Convention in Austin, where I criticised atheists for not being sceptical enough. And you’re not. Neither am I. None of us are. Lets work on it. Lets get better. Its that easy. It takes some effort.”

Later he elaborated on how some in the atheist community are not applying a reason and evidence based approach to their beliefs, saying “We have a number of people who are into all sorts of woo and conspiracy theories and who knows what else because much like those educated scientists and Victorians who were fooled, alot of atheists have convinced themselves that by getting what I think is the correct answer to what I think is one of the easiest questions in the universe which is ‘do I have a good reason to believe in a god?’ they then decide that they can’t be wrong about anything else. My brain works great. My brain works better than everybody elses brain. Those [other] people are stupid. I can’t be fooled. And 9/11 was an inside job.”

He continued to talk about how unsupported beliefs can impact communication of atheist and sceptical messages, and that it is counterproductive if additional unrelated views are included alongside atheistic views when trying to communicate atheism and scepticism in an environment where atheism is already the minority view.

He also talked about the relationship between sceptics and atheists, saying “I was frustrated because atheist groups are not necessarily sceptical enough to suit me, and sceptical groups are not necessarily atheistic enough to suit me, and the thing with sceptical groups is that that’s okay. You can have a bigfoot club, and if that’s all you want to focus on great. And I will applaud you and support you. There is no expectation on my part for any particular group to focus on religion. As a matter fact I understand why some sceptic organisations don’t. But I feel that some of them are perhaps a little down on atheists, and one of the reasons that they are down on them is because as I pointed out that atheist groups are not necessarily sceptical enough.”

Dillahunty was a Evangelical Christian for much of his life despite having a sceptical approach to beliefs outside religion. In his thirties he decided to become a religious minister, and it was a result of his examination of the Bible in order to better develop his understanding and ability to argue for its truth that he began to apply the same sceptical thinking that he applied to other beliefs.

Dillahunty often repeats his philosophy; to believe as many true things and the least false things as possible. Addressing the Auckland audience he said “We need to make people care about the truth. We need to care about what we believe and whether it is true”. How does Dillahunty know what the truth is? Truth he asserts is what can be demonstrated to be true. So when someone says something is true you cannot just take their word for it, you need them to demonstrate it through evidence and reason.

He talked about the difficulty of demonstrating supernatural claims, saying “What is the test methodology? When we get results which seem to show something we have to go back. Is this independently verifiable? Can we reproduce the end results? Have we taken all the proper steps to do controls? When we are investigating supernatural claims, when we are trying to put together a test to figure out whether or not the claim has any merit whether or not someone can demonstrate what they think they can demonstrate we need to construct a proper test. How could anybody possibly construct a proper test about something that is completely unknown, that is not demonstrated and is not taught in college?”

He continued to discuss the limits of what we can prove or disprove, referring to the efforts of the James Randi Educational Foundation in testing supernatural claims such as dowsing. The Foundation tests supernatural claims under rigorous test protocols. Under these conditions no supernatural phenomena has ever been demonstrated. Dillahunty describes the tests “… they fail and they fail and they fail. Have we debunked dowsing? Have we demonstrated that its not possible? No. What we have demonstrated is that on this day under these conditions this individual could not produce the effect they claimed they could. This is the problem. We first have to have a demonstration of a phenomenon. Preferably from somebody who is not intentionally deceiving people.”

In conclusion Dillahunty believes that scepticism properly applied to the subject of religions necessarily leads to atheism. He was however at pains to clarify that the atheist position is not that there are no deities, but rather that the claim that deities exist has not been demonstrated. Just like homoeopathic products have not been demonstrated to work, religious claims have not been demonstrated to be true. And in Dillahunty’s opinion there may never be a way to demonstrate the supernatural, saying “We seem to be currently and perhaps forever blocked from actually confirming supernatural causation. Scepticism is not about debunking, it is about attempting to confirm and failing to confirm. And there are people who will say that scepticism has nothing to say about religious claims because they are untestable. That they fall into the supernatural realm and therefore scepticism has nothing to say. And that is just not true, because what scepticism has to say about untestable claims is that because they are untestable we therefore cannot confirm them and belief cannot be warranted. Until such time that there is positive evidence for the claim we can’t even get started.”