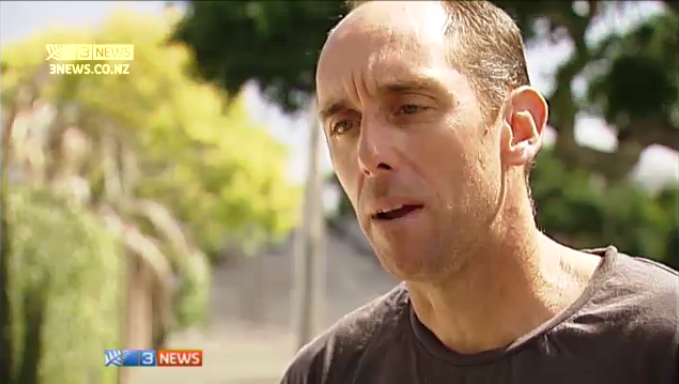 Roy Warren, a parent at St Heliers school, complained to the Human Rights Commission after he was unable to make progress with his complaint around being forced into a unenviable position of either allowing his son to attend religious instruction with his mates or be excluded. This achieved coverage both in the major daily newspapers and on national television, with Roy appearing on TV3 news on January 14.

In the interview Warren explained the reason he raised his complaint, saying “We don’t have any religious belief in particular in our family. We disagree with the fact that we should have to put up with it or opt our individually. We felt is was worse to take him out of it and take him away from his mates in class and make him feel alienated or just different than everyone else.”

After the media attention Warren became aware of the Secular Education Network (SEN). Members of SEN offered to help support him at the upcoming mediation between Warren and the school. At this point the SEN team became aware of two other parents, Melissa Muirhead and Maheen Mudannayake who were either in the process of filing a complaint to the Human Rights Commission or had actually done so.

SEN representatives attended the mediation meeting between the St Heliers school and Warren which lasted a whole afternoon, discussing the issues around religious instruction in schools and attempting to negotiate some form of accommodation. The result of the mediation is however confidential, so the final outcome was not made public.

Later, on January 27, Melissa Muirhead, who had not been involved with the Warren complaint, but had filed her own human rights complaint with the Human Rights Commission, appeared on TV1’s Breakfast show to discuss her reasons for questioning the religion in schools program at St Heliers.

Muirhead explained clearly and concisely what her objections were to the St Heliers religious instruction programme, saying “I think religion in schools discriminates against against children and families that come from a different religious belief than Christianity. The classes themselves are very much religious instruction, so children are encouraged to write prayers to God. They are encouraged to write notes to God to say they are sorry and ask forgiveness.”

She continued to identify the impact of religious instruction in a multicultural society, saying “It is only Christianity that is covered its not other religious so I don’t feel it is inclusive and it doesn’t actually capture the fact that we live in a multicultural society with a whole pile of people with different religious belief systems. Religious education that covered in the context what some people believe and why, that would be awesome. This isn’t religious education, this is religious instruction. So I believe this is more indoctrination.”

Muirhead described how her young daughter has been the victim of this indoctrination; “My six year old daughter came home saying “Jesus and God made the world mummy.” And that is what she is learning at state school. This is telling children about one particular religious belief system. And they target five and six year old children. Its done within the classroom in class time. Children at that age don’t see the difference between a Bible teacher and their normal classroom teacher. They see it as a normal classroom lesson.”

Buddhist parent Maheen Mudannayake was also considering a complaint after his children were left to draw or do menial tasks while religious instruction was in progress, saying “For them, it’s basically like detention. They hate being away from their peers and they find it hard to understand why they’re away given they’re only Year 1 and Year 2, so these are five- and six-year-olds we’re talking about.” He opted his children out of religious instruction when he discovered that Bible in Schools instructors performed mock communion using fruit juice and rice cakes in place of wine and bread.

Facing two more complaints to the Human Rights Commission the school decided to move religious instruction out of school time, sending a letter home to parents on February 10 informing parents that religious education would be moving to after school hours, saying “The board of trustees believes that our school values are central to creating a positive learning environment for all students. We feel that continuing to offer the CRE programme, albeit in a different time slot, while also taking the time to actively consider the diverse views on this issue, is consistent with those values.”

All the parents complaining about religious instruction were happy with this decision, and withdrew their complaints to the Human Rights Commission. However, religious parents at the school were far from happy. A few weeks later National MP for Tamaki, Simon O’Connor was quoted to say “My primary concern is, what does this ultimately mean? If you take the negative line, which is to remove programmes from schools on religious grounds, what’s the next step, what does that mean for the use of say, karakia or grace in schools, and other spiritual expressions.” This was the genesis of the talking point that religious rights were being violated when religious instruction classes at secular schools were stopped.

Belinda Lewer, who has two children attending Milson School objected to the introduction of religious instruction, saying “We never found out the results of that survey and all of a sudden it’s happening.”

She was concerned that religious instruction would force parents to find other arrangement if they opted out, saying “I want this sorted because I want to be able to make arrangements for my son. I’m not going to send him to school that morning, I don’t want him to learn double doses of PRIDE values, because he learns enough, but that also means I have to arrange my work life.”

She pointed out how these classes target vulnerable young children, saying “it’s about the children, these kids are being put in awkward positions – at the age of 6, in my case.”

Lewer expressed her desire to raise the issue with the Human Rights Commission if the program was introduced, and subsequently the school relented and moved the religious instruction classes out of school hours.

As a result of the decisions at St Heliers and Milton schools and the associated media coverage the tone began to become more hostile. Religious parents from St Heliers said they would seek to reinstate religious instruction. There were a few common themes to these articles. The first theme was attempt to confuse ‘religious instruction’ which is evangelical promotion of a single religion and ‘religious education’ which presents multiple religions and attempts objective comparison between them.

The focus also moved toward SEN itself, culminating with the interview of David Hines, spokesperson for SEN, on Seven Sharp by Mike Hosking. Hosking launched directly into asking why parents who didn’t want religious instruction were hijacking schools, saying “I know you guys were involved, but a solitary parents complaint; why are parents hijacking what schools do?” David Hines replied “I don’t think Belinda was hijacking anything. She made a protest. I talked to her a bit about how to prepare a media statement if she wanted to do it. She complained to her school board. Last night that school board decided to have an emergency meeting today. Belinda didn’t even know about this and the meeting decided to can it. So we didn’t put any pressure on, we were just watching from the sidelines.”

Hosking was not satisfied however, asking the same question in another way; “Isn’t that the problem of the parent and why is the parent hijacking the school and therefore the kids life by behaving that way? Why doesn’t the parent get out of the schools life and let them educate the kid and get on with it?” Hines replied once again that “Nelson school in Palmerston North did not have to go along with Berlinda Lewer who objected.” Hosking could still not resist claiming “its a hijacking” one last time before the interview closed.

Instead the school decided to agree to a compromise with the Christian Education Commission’s Simon Greening who wanted to run a lunchtime program rather than a after school program. This agreement was reached without any further discussion or communication with any of the original complainants. The original complaints to the Human Rights Commission had been dropped after the school made the first announcement without coming to a formal agreement. This meant they were able to change their mind later without consulting the parents involved.

The whole saga at St Heliers was stressful for those involved. It is unfortunate that parents should be put in this position when their children are attending a state school. The Secular Education Network continues to provide support, encouragement and advice to parents who are facing these kinds of issue. They are also starting to engage with politicians at the national level. Secular Education Network parents and supporters have committed to continue the effort, and to bring real freedom of belief to New Zealand schools. It is clear that the efforts are paying off with more and more parents willing to stand up and speak out against religious privilege in New Zealand.