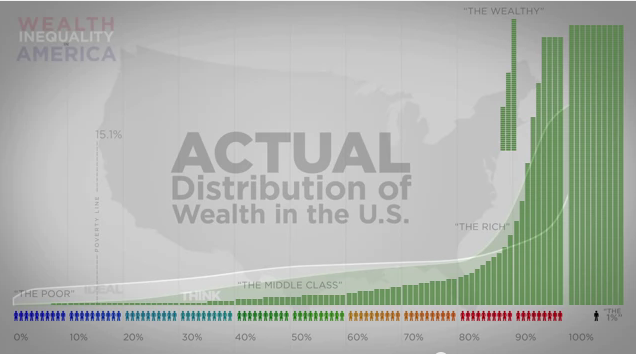 In 1984 society was an Oligarchy where the leaders at the top, the Inner Party, had a huge percentage of the wealth while the Proles, the lower 80% of people, had little or no wealth or political power. Anyone familiar with the levels of wealth inequality in the United States knows this is reality today. The bottom 40% of Americans have little or no wealth and are barely getting by. The top 1% have 40% of the wealth.

The vision of 1984 was of class structure, where if you were born a Prole you would never have the opportunity to move up in life. Evidence shows that this increasing lack of social mobility is the case in the United States despite the fairy tale stories of people working hard and making a fortune.

The world of 1984 was a surveillance state, where everything you said and did may be observed and recorded. If anything the world of 2015 is Big Brothers wet dream. Today all your communications are monitored, recorded and analysed by legions of cold calculating machines that work out how best to take economic advantage of you. The Government may be spying on you, but so is Amazon, Google and Facebook. And what is more you have willingly entrusted them with all your data. Using mobile phones they can now track where you go, and through your bank transactions what you buy. They know more about you that you do.

In 1984 the Ministry of Truth ensured that only the story those in power wanted you to hear was heard. Big Brother controlled the news, the perfect propaganda machine. Today the media giants have merged, with a few big players controlling much of what you get to see on the news. The ultimate expression of this naked corporate control of the media is Fox News which fires a uninterrupted stream of corporate propaganda with a barely detectable veneer of actual news. Fox News is the 2015 version of the Ministry of Truth.

In 1984 there were whole departments which revised old news to change history. Today with electronic news it can be changed at will. Copyright technology is increasingly being deployed to prevent people taking their own copies of content. This way citizens are simply consumers of the information they are fed. Through copyright corporations are taking back the freedoms that the Internet once promised.

Perpetual war was also a feature of 1984. War was simply a device to keep the population subservient. Nationalistic fervour and unthinking obedience to the state was required. It kept the population in a constant state of fear. In our world we have seen war after war. In the 1960’s Communism was the existential threat. Then it was drugs. Then terrorism. Unlike 1984 however the threats have become more diffuse and ill defined. How can you ever win a war against ‘terrorism’?

The attacks of 9/11 gave politicians the cover they needed to implement sweeping changes to allow invasion of privacy and surveillance that would never be accepted previously. The speed at which all the protections of law and right to due process were swept away was breathtaking. The spectre of terrorism was used to implement legal changes that Big Brother would be proud of.

The use of torture in 1984 was not extensive. Most people were kept in line through propaganda and fear. However, occasionally there were those who thought for themselves, and it was those people who were ‘re-educated’. We do not see torture used extensively today either, but we see that those in power had little problem with resorting to it when it suited them. The US conducted active torture of people in Afghanistan and Iraq. They continue to detain and torture people in Guantanamo Bay, denying the prisoners there either the right to due process or their rights as prisoners of war. Despite the assurances of Obama the camp has not been closed and its inmates not given due process.

Are we in 1984? Perhaps you should ask the inhabitants of Baltimore. It is all very well for us who are living in relative comfort, to look at our own privileged lives and claim we are not in 1984. We are the Outer Party in 1984, the 20% who have comfortable lives insulated from the poverty and suffering of those below. If you look at the facts we are living in a world very close to that described in 1984.